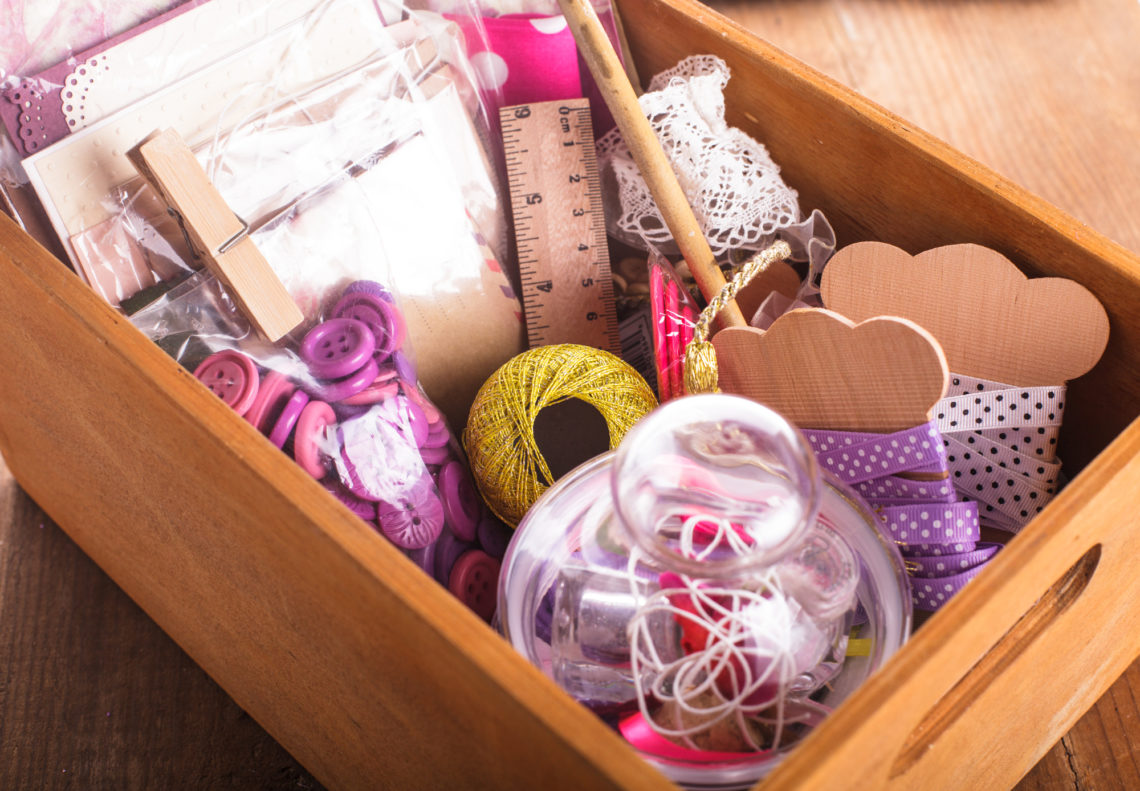 While I enjoy many hobbies and pursuits, I’m never quite as happy as when I have some sort of thread or fiber or needle or crochet hook in my hands and am working through fabric or canvas. My two main crafting mainstays are needlepoint and crochet, though every year I teach myself a new craft. Last year I taught myself to quilt, something of a lifelong dream. This year I went back to cross stitch, something I’d done as a little girl and find to be incredibly soothing.

But crafting has always been extremely personal personal for me, most especially since stitching was definitely a meditation. It felt like by exposing my finished projects I might actually be exposing the thoughts I worked through while working on my canvas. Well, then social media came along and I started sharing some of my stuff. I still keep most of it private because I also craft with intent, so if I make someone a gift I don’t want to share the reason or emotion behind it with the world.

Back to cross stitch

Anyway, here’s a cute mid-century cross stitch that I finished last night. I made it from a pattern on Etsy that I fell in love with. While I usually change colors that I use, I really loved this designer’s palette so I kept it mostly as is.

Meanwhile, all the cross stitch talk inspired a conversation on my (private) Facebook page about my own designs, so I’ll share one of those below this one. 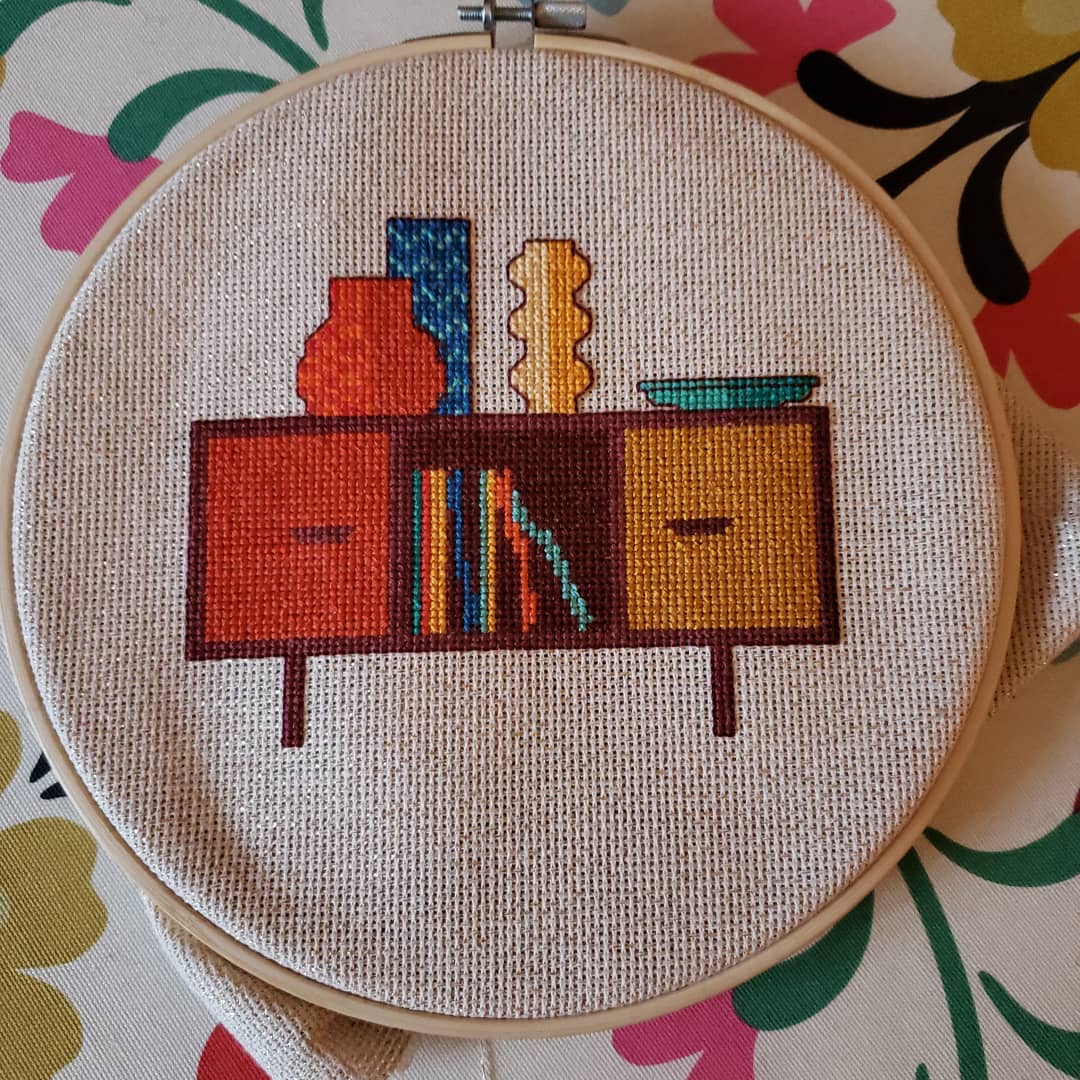 And a needlepoint for good measure:

For a while there, I made miniature needlepoint rugs. I’d start with a blank canvas and then chart a design I was inspired by on graph paper. It could take weeks just to perfect the pattern and then years to finish the actual rug. Here’s one I really love (but have yet to frame). It’s based on an antique kilim rug in the Victoria and Albert Museum. It also took me seven years to complete. I know. Imagine staring back and forth between a mostly blank canvas and various sheets of graph paper on and off for more than half a decade. 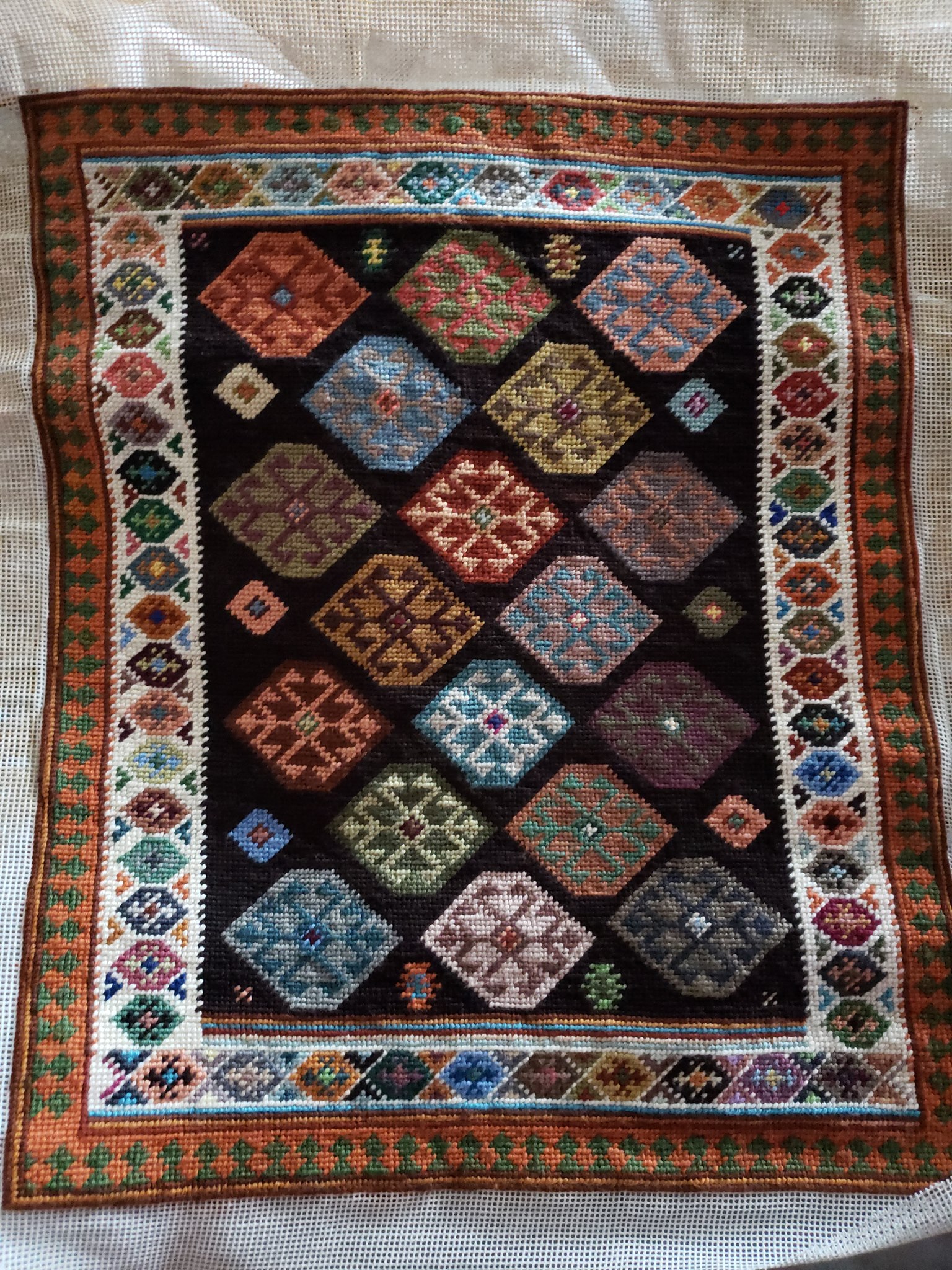 And just because, here’s an essay I wrote on crafting during my commute. It first appeared on TueNight.com

Zen and the Art of the Crafty Commute

As someone who makes her home in a tree-lined, mostly hipster-free (knock wood), very outer area of the most desirable outer borough of Manhattan, I spend an inordinate amount of time commuting. Despite the rumblings of further encroaching gentrification, I’m blessedly still just a little too far from the maddening crowd.

Yet another Fashion Week event invitation? Not all that interesting if it means spending extra hours on the back and forth. Tribeca Film Festival? You’ll need a pretty compelling line-up for me to spring for a cab back home. And, yes, I did just turn down an invitation to the cocktail party gala for the Frieda Kahlo exhibit up in the Bronx because no one offered to send an Uber.

While I schlep back and forth on the F train to meetings or dinners or cocktails or basically anything worth doing, I tend to complain mightily. And I always have a plan of attack. I avoid eye contact, avoid frottage and try to have something to focus on other than the smells and sound effects of the NYC subway system. While some people prepare go-bags, I have my what-happens-if-I’m-trapped-underground-in-a-tin-can-and-pressed-up-against-hundreds-of-sweaty-strangers-and-possibly-dueling-a-capella-doo-wop groups bag. I’m never without water, a snack or two and, most importantly, some sort of craft.

Crafting for me is second nature; it’s my zen and happy place. While some people rely on rosary beads to calm their nerves during their commute, I’m never quite as calm as when I have yarn or fiber wound around my fingers and a needle or crochet hook in my hand. When I’m concentrating on my project of the moment, I can tune out the screaming babies and bickering couples. I count stitches and ignore the endless delays and scratchy conductor announcements.

Crafting is comfort for me. Crafting is love. My mother opened her first yarn and crafts store when I was two. I learned to crochet (or at least make really, really long chains) when I was still a toddler. My earliest memories are of staring up at a wall full of color and trying to figure out which yarns belonged best together.

When I was undergoing chemo a few years back, I’d crochet intently in the waiting and infusion rooms. I could tune everything out and just concentrate on what I was creating. My mother and I would sit next to each other, crochet hooks moving in unison, crafting an unbreakable chain that binds us. And as I felt better, I’d randomly give other chemo-bald women the cute hats or headscarves I’d just finished.

Despite the resurgence of crafting in the past years, doing so on a crowded subway car still elicits a lot of gawking and curious glances. I was once working on a needlepoint and felt sorry for the woman standing across from me dressed as a mermaid (pasties, green satin tail and all) because she was getting so much less attention than I was.

Last year (or maybe it was the year before that one), I was heading home on the F train and noticed a woman furiously and industriously hacking away at some sort of yarn-based craft. I won’t mince words — it was hideous. It looked like a mutant dinner plate, made from some bulky yarn in a shade that can best be described as congealed vomit.

I looked back again with horrified fascination.

As the train emptied out slightly, we sat near each other, sisters in craft if not technique. She smiled admiringly as my fingers whirled and twisted and a whisper thin pink scarf emerged. We sat quietly and companionably for a while, meditating on the woman shouting at the top of her lungs about Jesus saving even us.

Finally, I couldn’t help myself. I smiled and asked about the hideous mass springing forth painfully from her fingers. She looked up at me shyly and beaming with pride and said it was to be a yarmulke, the round beanie worn by some Jewish men. And it was meant for her almost 13-year-old son to wear at his upcoming bar mitzvah.

I complimented her dedication.

I thought about a young boy’s life ruined if forced to don that truly atrocious headgear and saw a fast-forward of a life destroyed by a mother’s misguided love.

And so I waited patiently until she dropped a stitch. And then another. And finally, I gently removed the Quasimodo-shaped disc from her trembling hands and offered to help her just a bit. I subtly and efficiently tore open the stitches she’d agonizingly created. I distracted her with small talk as I furiously reformed the little kipah until it resembled something presentable if not all that attractive. And for the next forty minutes or so, I guided her and helped her, and every now and again re-stitched that young boy’s future.

There are those that believe that food is love, with comfort food being the greatest symbol of nurturing.For me, it’s crafting. And sometimes that means sharing that great bond with a total stranger on the F train.