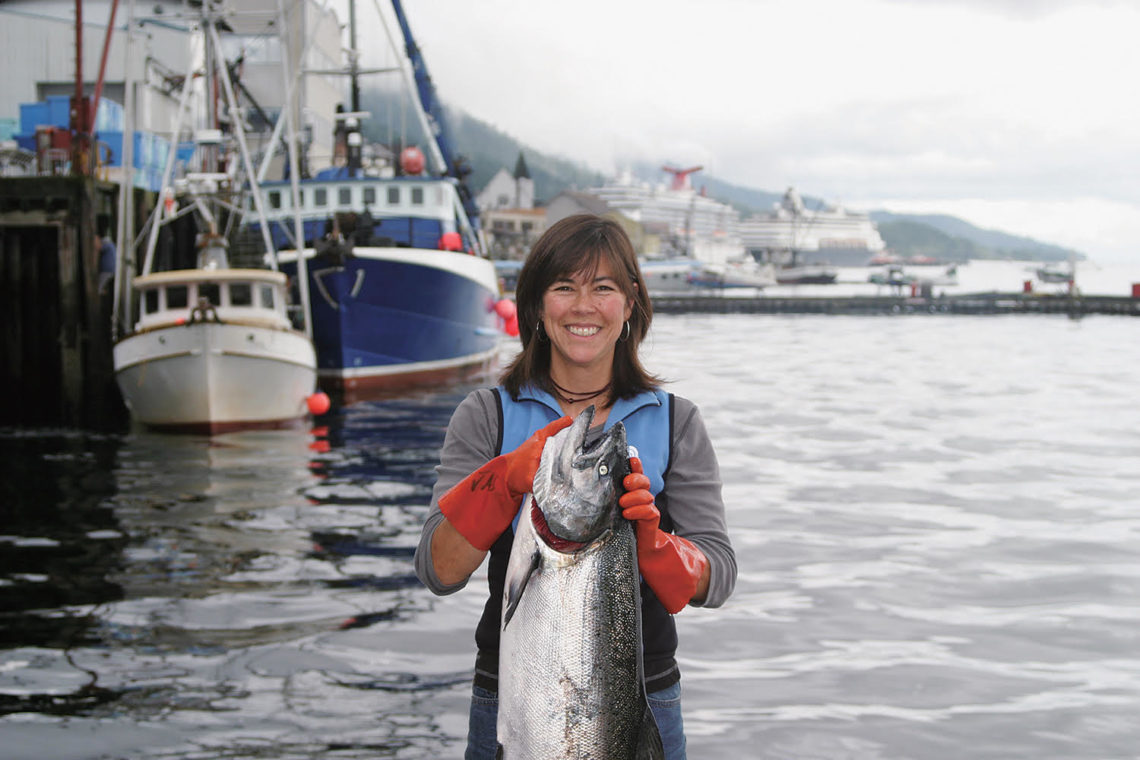 This post originally appeared on Parade.com, where I’m a longtime contributor and  lifestyle columnist. From time to time I’ll be sharing some of my most popular stories that appeared elsewhere.

There’s a hashtag going around twitter to #DressLikeAWoman. It’s pretty much an invitation to challenge the ideas of how women dress, and how what they wear does or does not define them in life. To that end, I spoke with two Alaskan female fishermen (yes, that’s the correct terminology!) to find out about the challenges of being a woman in an almost exclusively male-run industry.

Tomi Marsh, who first went to Alaska in 1982 as a cook on a floating processor, and Julie Decker, executive director, Alaska Fisheries Development Foundation and a commercial fisherman for twenty years, are not what you’d expect. Though I’m not quite sure what I’d expect a female fisherman to be. I met them over dinner last fall. While I’m not particularly a fish person, I was fascinated by the way they grilled our waiter (and then the Maître D’, and then the chef) about not only the provenance of the seafood, but the cut, freshness and factors I can’t begin to list because they were so incredibly nuanced. I had the best Alaskan salmon I’d ever tasted when dining with these two seafood connoisseurs.

Why Fisherman and not Fisherwoman? When I asked why they prefer the term “fishermen” and not “fisherwoman,” Marsh said, “You earn respect as a male or female fisher, so the gender labels are not necessary. You work hard to be one of the crew and respected, not one of “the guys”—there’s a big difference.” Becker weighed in by saying, “My sense is that both men and women who fish have to prove themselves. It’s not an easy or forgiving industry, because mistakes can be dangerous, if not deadly. To rename the category “fisherwoman” or “fisher” could take away from that elite status that we’ve worked just as hard to attain (and sometimes, harder, as with most occupations in the world).”

Somewhat Zen: While fishing is often described as being a fairly Zen pursuit, Marsh says, “Being on the water and being a fisherman at sea comes with a variety of different emotions: it is boredom, terror, success, failure, anger and gratitude all mixed up into one roller coaster. You never know what will happen next, what treasure you may see or experience, or what frustration awaits you with a boat repair, bad weather or something else.” Decker said, “Fishing can be many things. It can be extremely peaceful and Zen-like during those moments when all is quiet and raw, and beautiful nature is all around you. It can also be extremely hellish, generally under two circumstances: 1) when you are physically uncomfortable from back-breaking, tedious, cold work, or 2) when you are battling a storm and don’t even have time to be afraid—all you can do is  act quickly to try to keep up with things breaking, water coming onboard, making sure you don’t go overboard, and keeping all the mechanical parts/engines running.”

Staying Connected: As for staying connected while at sea or at home Marsh says, “We have satellite phones, marine radios, and more, so you can stay as connected or as disconnected as you choose. Fishermen are chameleons—many have other jobs, work obligations and families. You never know if it is the community dentist who will be delivering the halibut, or if the crab fisherman is also a well-known photographer. This crossover makes it easier to maintain that sense of community both on land and at sea.” Decker says, “I don’t feel odd when I’m on dry land in Alaska, because so many people either commercial fish or know others who do, or just live a similar lifestyle and can relate. But when I go down to the lower 48 states, I feel different. It’s kind of fun—like I’m carrying this great secret around that others will never be able to understand.”

The Greatest Misconceptions: Marsh says, “People always say, ‘Fishing must be so dangerous and scary! AND, you’re a woman?!, However, I’ve always felt that fishing is less dangerous (in a different sense) than driving on a crowded highway or as a woman, walking into a dark parking garage at night, for example. When you’re at sea, you’re working with a group of men and women you deeply trust and respect, and everyone works equally hard to ensure it is a safe and successful trip. One would never ignore a radio call for help or turn their back on someone else who was in trouble.” Decker says, “If I were to guess, probably the greatest misconception is that female fishermen are not feminine. They most certainly can be! Take the Salmon Sisters, for instance. They grew up fishing with their families and now own their own line of clothing (and do a lot of the modeling for their clothing line)—they are beautiful!”

Cooking with Family: Marsh wrote a cookbook called The Fishes and Dishes Cookbook. “My sister, Laura, and I wanted to share our experiences of fishing with a broader audience. We wanted to celebrate the friends we have made along the way and the experiences that have shaped us. In fishing, there are two gifts that are always appreciated—sleep and food. Whenever other boats visit, we exchange food or a dinner. This sense of enjoying food with our community is extremely important and we hoped to share that.” As for her favorite recipe, “I personally love the Miso-Glazed Black Cod recipe. I’ll have that for breakfast! I also love the Spicy Salmon Sandwiches with Caramelized Onions and Rosemary Aioli.”

Braving Life’s Storms: Marsh and Decker offered advice for women (or men) on how to face really scary moments and persevere: “You cannot get off the ship during a storm, so you better make sure you’re prepared before it hits! That could really apply to any scenario. For us, this means making sure the engine room is secure, taking an inventory of your lifesaving gear, and having snacks and a good book ready. Decker shares this:  You get through with Endurance – ever read the story of the explorers who were shipwrecked in the Antarctic for over a year and everyone survived…? The Captain was Ernest Shackleton and the ship was called The Endurance. Never give up. All storms pass.”

Know What You’re Eating: I’d always heard about farmed salmon and why we should avoid it, but Decker explained why we should Ask for Alaska (#AskForAlaska) for these reasons:

The Cool Parts: Decker says, “One of the coolest things I’ve seen (that most others have not) was when I was commercial diving with my husband in a body of water in Southeast Alaska called Icy Straits (and it is COLD!). We were split up so we could work separate areas and were harvesting sea cucumbers by hand. It was a cold and dark day in November. I could faintly see the shadow of something that looked like a large boulder.  As I swam closer, it started to look slightly different, but I didn’t pay much attention. As I got closer, I wanted to see if there were any sea cucumbers near the boulder, but I suddenly realized the surface of the bolder was moving—as if it was alive! I couldn’t tell what was happening at first. Was I seeing things? I squinted to see better. The surface of the “boulder” was moving—rotating like water that falls down the side of a structure, and then recirculates back up to the top and starts the process over again. It finally dawned on me—my husband (who had been diving a lot longer than me)—had told me about seeing one of these himself. It was a “King crab ball”. Hundreds of King crab balled-up in a pile on the ocean floor. It was truly freaky, exciting and cool! It looked somewhat like the photo in this link.” 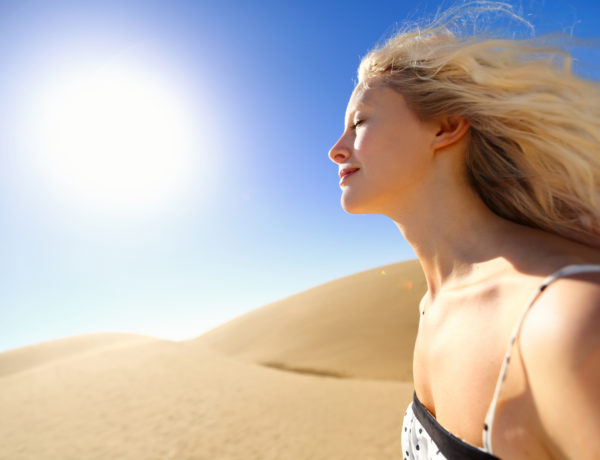 Everything You Ever Needed to Know About Repairing Sun-Damage: Three Top Derms offer Post-Summer Skincare Advice (Part I) 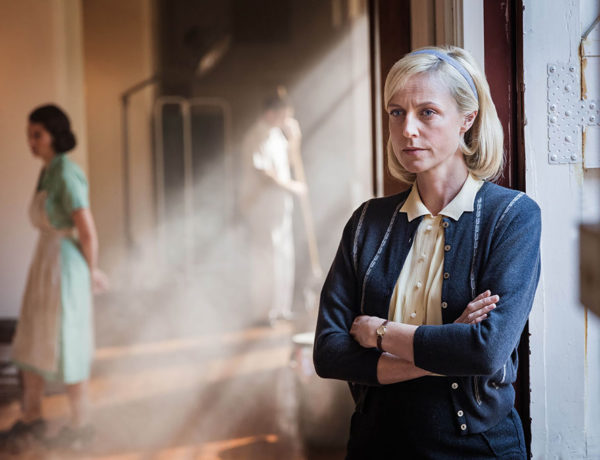 Interview with Marta Dusseldorp of A Place to Call Home 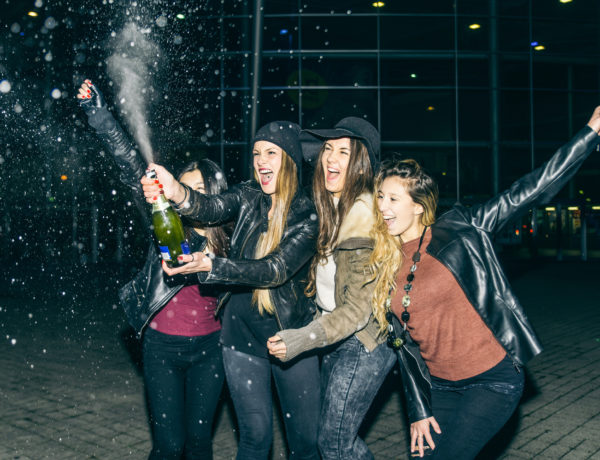 Look Better in All Your New Year’s Eve Pictures: Advice From a Pro Photographer